A fresh change to an old painting

They say that the best time to clean out your cupboards, wash your curtains and clean up an old painting is in Spring.  Well, the owner of this painting that I did a few years ago clearly thought so.  She had the art in her bedroom where she looked at it each day before getting up and going to sleep.  As a result, she had a lot of time to contemplate what she liked most and what she thought would look better.  She was very clear about what she wanted me to change to make the picture more personal to her.  It was an unusual request but I thought why not…The original acrylic was returned to me in good order and I began work straight away on her additions. 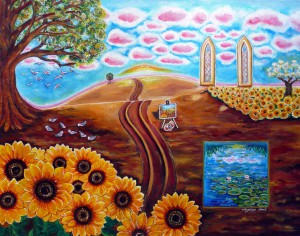 It actually was lovely to see it again and while I immediately began scrutinising my previous technique, I also began making up the sketches of the items she wanted to include, namely a cross to be placed into the picture where the glass windows in the sky stood to feel it feel like an altar.

She also wanted it to look a little more green… her favourite colour of course, along with a softening of the sunflowers, water insert and clouds that lined the path adding more depth with light and shade.  She was in no hurry and after having a little fun adding & removing some birds too, I returned the painting to her several weeks later.  One happy customer !

Would you like an painting created especially for your home, workplace, or as a special gift for a friend or family member? My ‘Commission a painting’ page offers a range of painting types and sizes available to suit any budget that are both unique and affordable. And in case you missed them, you can see all my painting artwork in the Gallery.